Historical significance of the Rose Trail

The south end of Highway 40 was once the site of a native village in the 1700’s with several archaeological site investigations by the University of Windsor.

The south-east corner of the new Highway 40 extension is the site of the Webber rural school, a union of Chatham and Dover townships, one of the first rural schools of the area.

MacDonald Park was named after Eric MacDonald, former Wallaceburg Mayor, founder of Mac-Craft Boat Works (1938) and Mac Construction (1946). It is the location of commemorative sites and a plaque outlining the famed Baldoon Mystery which took place nearby in the 1830 to 1840 period. Immediately South is the Roberta Stewart Wildlife area set aside as a natural habitat.

The Chenal Ecarte or Snye River is an historic waterway providing a deep water route from the St. Clair River inland to Wallaceburg, Dresden and Wilkesport once vibrant ports. During the 20th century passengers steamers from Detroit plied this scenic waterway.

The Snye View Orchard area along the Chenal Ecarte is an area alleged to be the scene of the famous Baldoon Mystery the one in which many strange happenings besieged the MacDonald family.

The village of Port Lambton was once the scene of illicit activities during the Prohibition period(1920 to 1933) when alcoholic beverages were illegal in nearby United States. The border, the St. Clair River is one of the busiest waterways in the world where ships from around the world can be seen. Port Lambton was once a very famous resort community. 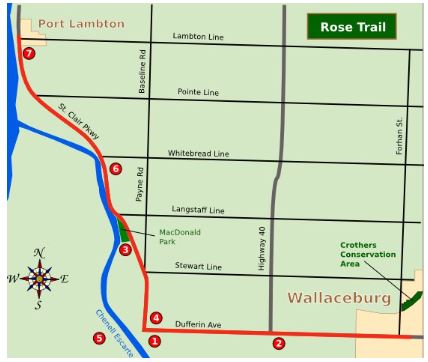 Funding provided by the Government of Ontario